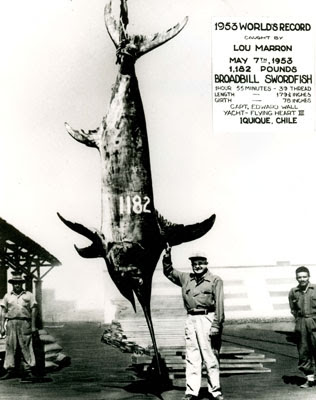 Back on July 1953, angler Luis Marron caught a mammoth 1,182-pound swordfish off of Iquique, Chile. The sword was caught using a bonito as bait. 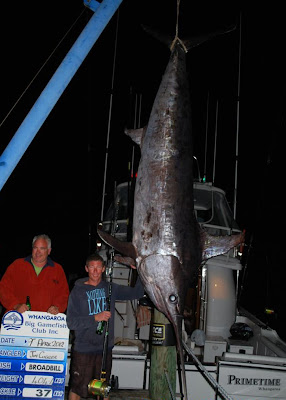 This 404.4 kg (891 lb 8 oz) broadbill was landed by Kiwi angler Jim Gigger, while off Cape Karikari, New Zealand . Fishing aboard the Primetime with Capt. John Gregory (http://www.primetimecharters.co.nz), Gigger needed only an hour and 20 minutes to land the monster. 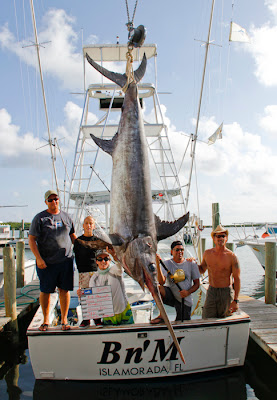 A 460 pound swordfish caught in Islamorada, Florida on board Bn'M of Captain Nick 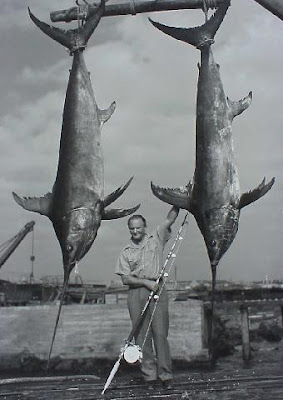 Found worldwide in temperate and tropical oceanic and continental shelf waters from the surface to depths of 400 500 fathoms or more. Except when spawning, females prefer cool, deep waters near submarine canyons or coral banks. Males prefer to remain in somewhat warmer waters.
This pelagic, migratory species usually travels alone. It uses its sword for defense and to kill or stun food such as squid, dolphin, mackerel, bluefish and various other midwater and deep sea pelagic species. Occasional attacks on boats have been authenticated by the recovery of swords found broken off in wooden hulls. Fishing methods include presenting trolling baits or deep drifting at night with bait such as squid. ery large swordfish are always females. The males seldom exceed 200 lb (90 kg)