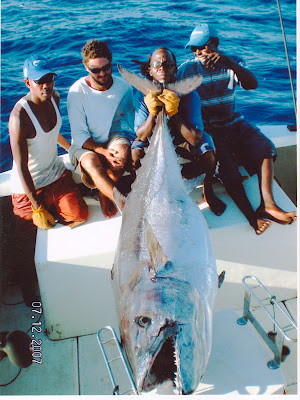 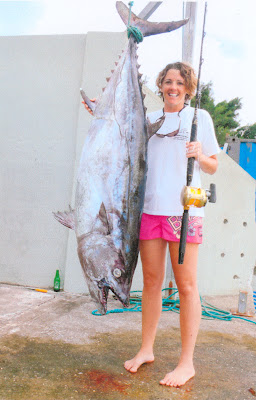 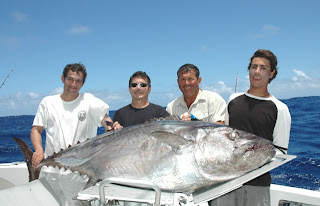 A 104 kilos - 230 pound dogtooth tunacaught on Rodrigues Is. 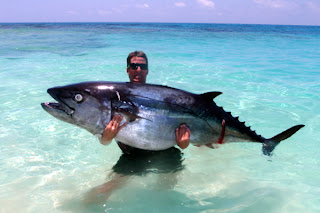 A 110 kilos -240 pound tuna caught in Tanzania by Cameron Kirkconnel. 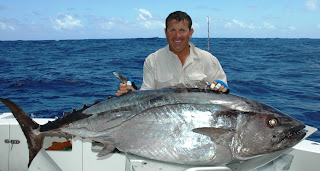 This tuna was caught off Rodrigues Island. www.rodfishingclub.com 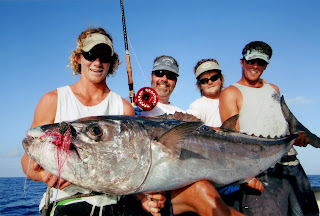 One of the biggest dogtooth tunas IGFA world record caught on fly  www.igfa.org

Dogtooth tuna is called lizard mouth tuna,  white tuna, vau, dadori tuna, kidukidu.
This pelagic tuna inhabits tropical and subtropical areas of the Indian and western Pacific Oceans around coral reefs. It has been taken in the South Red Sea and sporadically in southern Japanese waters as well as around Papua New Guinea, the Marshall Islands, the Society Islands, the Marquesas Islands and from all East Africa to Australia. It is a migratory species, but is known to enter in shore waters during the warm season. This predator is usually found around or reefs, channels, passes or rocky areas, where it feeds extensively on reef fish. The dogtooth will readily consume a smaller mackerel, squid or other small pelagic fish.